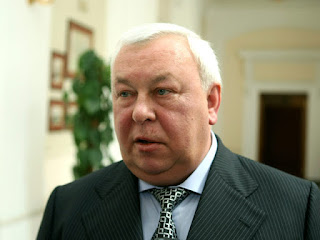 MOSCOW. A formal complaint to the World Court has been filed by Evgeniy Murov, a member of Russian President Vladimir Putin’s cabinet, to protest the recent decision by the U.S. State Department to freeze the assets on his Starbucks card.
As Director of the Federal Protective Service of the Russian Federation, Murov, 68, oversees Russia’s secret police and anti-terrorism forces. An admitted caffeine addict, he is a longtime patron of the Starbucks branch on Proyezd Voskresenskiye Vorota at the State Historical Museum, a short walk from the Kremlin.
According to Starbucks senior barista Olga Ivaroff, until the suspension of his account Murov started each day with a Grande Cafe Latte topped with nutmeg, cinnamon and vanilla. He would return at noon for a Café Mocha and once more in the late afternoon for a Hazelnut Macchiato Stoli Lemon Vodka, a special alcoholic coffee drink created in his honor.
Murov claims that the U.S. action is unfair retaliation for Russian meddling in recent U.S. elections.
"I have nothing to do with Putin's hacking of voting machines. I am humble interrogator and torturer of opposition leaders and homosexuals."
Murov funded his Starbucks Card with 2,000 rubles, the equivalent of US $56. He was apparently unaware that these funds were being held in an account with the Moscow branch of Citicorp, which was ordered by the State Department to freeze the accounts of all senior members of the Putin government.
In a recent interview with the BBC, Murov called the suspension of his Starbucks Card an “act of economic terrorism that infringes on Russian sovereignty and internal affairs.”
Looking exhausted and jittery, Murov waved his empty 20-ounce Starbucks stainless steel travel tumbler and complained, “How can I conduct brutal beatings of traitorous female rock bands or break fingers of Chechnyans if I am denied the energy and comfort provided by these most delicious coffee concoctions?”
While the Putin government has not responded directly to this action, an unnamed Kremlin source says that it is seriously considering invalidating all “Buy 6-Get 1 Free” customer loyalty cards issues to U.S. patrons of the Borscht & Blintzes, Russia’s largest fast food chain.